What Happened to March 2020 Local Revenue Measures in California? 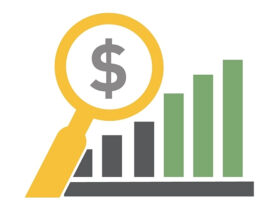 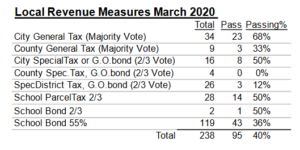 This comprehensive report by Michael Coleman on local ballot measure outcomes in California’s March 3rd, 2020 statewide primary election provides a vital service by helping all of us to understand an election that took place seven weeks ago, in a world that looked radically different from the one that we face today. California’s March 3rd election represented a dramatic departure from recent precedents in our state. From the sheer number of local tax and bond measures on the ballot (more than any previous primary election) and the historically small share of them that won approval from voters, to the first unsuccessful statewide school bond measure in a quarter century, last month’s election was exceptional.

1  WHAT MAY HAVE HAPPENED, AND WHAT HAVE WE LEARNED SO FAR?
What were the factors that contributed to the rejection of so many finance measures on the March 3rd primary ballot? While a complete picture of what occurred (and why) likely won’t be available until after ballot-counting has been completed and the final election results are certified by the State, FM3 and others have already begun conducting a variety of post-election voter opinion survey research that has yielded useful data. Some key findings from this research include:

2  WHAT MIGHT THIS MEAN FOR NOVEMBER 2020?
Key to understanding and interpreting the March 2020 results is the fact that, between the Summer/Fall of 2019 when finance measures were planned, researched, drafted, and formally added to the ballot, and February/March when the ballots were cast, the context of the election changed. These changes occurred in ways particular to the various measures themselves, to the shape of the turnout, and then, in the final days and weeks before election day, with a health crisis and early warning market shock that may have altered views about the process of voting and the likelihood to support spending measures.

Today we are experiencing perhaps the biggest contextual shift during an election year in over three-quarters of a century. The virus and its consequences will profoundly change this November’s election, including by making decisions about whether or not to go forward with ballot measures and, if so, how to plan and execute their associated public communications and outreach more dynamic and crucial than ever.

Many California local agencies have long been planning finance measures for the November 2020 election to address long-term fiscal needs. Further, given the structure of local government revenue in California, the present economic downturn will no doubt create a need for more revenue in additional communities, particularly when combined with the fiscal demands of responding to the COVID-19 pandemic. Understandably, many local leaders may be questioning whether this November’s election is the right time to ask their community to consider additional local revenue, given the economic and public health outlook – regardless of the degree to which that additional revenue is needed.

We urge local leaders to preserve their options by delaying final decisions on whether to move forward with potential November 2020 finance measures for as long as possible (and ideally until the late summer placement deadline for local ballot measures), for at least two reasons. For one, while it may be a cliché that in today’s 24-hour news cycle a few months is a political lifetime, the speed at which current events are unfolding regarding both the COVID-19 pandemic and the economy makes this truer today than perhaps ever before. There is no way for any of us to say with any degree of certainty under what economic and public health conditions the November 2020 election, or its leadup, will take place – other than that they will almost certainly be very different from the ones we face today. Furthermore, adverse economic conditions are also no guarantee of failure for local tax and bond measures, many of which continued to win approval from voters during the Great Recession and its immediate aftermath.

Though early planning (including research and public engagement) remain crucially important, by delaying final decisions regarding whether to place a finance measure on the November ballot until closer to the ballot placement deadline, local agencies can preserve their flexibility to adapt to rapidly changing circumstances. While none of us know what the context for the November 2020 election will be, providing local officials the opportunity to make research-informed “go/no-go” decisions later this summer, when that context is likely to be clearer, can help lay the groundwork to generate much-needed additional revenue.