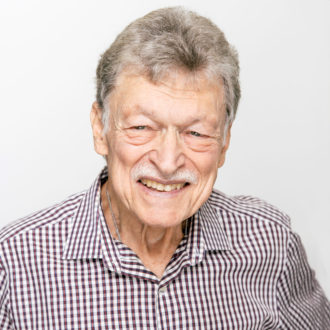 (March 2019) It is with great sadness and profound appreciation for his life that we mark the passing of Richard Maullin this week at the age of 78 from complications associated with Parkinson’s disease. Richard was, along with John Fairbank, our founding partner. He was for more than four decades a brilliant researcher and strategist, a devoted father and friend, a patient and respectful mentor, and, most of all, a guiding light for our firm, its many clients and all the people that worked with him.

It is no exaggeration to say that Richard was the heart and soul of FM3 Research. It was his management and vision that guided us, his diligence and calm demeanor that steadied us, and his commitment to the principles of sound public opinion research that helped build us into the company we are today. He was always there to give advice, fix a problem, find a solution or, in his own wry and humane manner, offer a telling observation or make a situation better. Richard was a calming influence who kept us moving forward with a steady and unshakable force. It often seemed as if he spent his days guiding his clients through the thickets of public opinion and politics or business while devoting his nights to ensuring that our company stayed afloat through the storm clouds of the economy and consulting industry.

As has been noted Richard’s career began with his work for Governor Jerry Brown, demonstrating his passion for his native state and its politics. It ended with his service on California’s ISO Board of Governors, capping a career of work for the institutions of the state he loved, particularly in but hardly limited to the energy arena. He always said if he could choose one place to live in the world, it would be Los Angeles for it was the future of Southern California and its residents Richard most wanted to help influence and direct. Yet he had another profound and extraordinary love — the people of Vilnius, Lithuania and particularly the Jewish culture which remains there. Richard’s ancestral homeland became a special part of his life these past two decades—he would often eschew the normal vacation or holiday to return there, building a personal connection that had great meaning to him and to those Vilnians he befriended and helped.

The test of a great researcher is to examine a problem without bias and to apply curiosity and devotion to translating the attitudes of the public to the people and institutions pledged to serve them. By that or any standard Richard Maullin was a great researcher. The challenge of a superb leader is the ability to inspire people around him or her with a commitment to high standards, an example of hard work, and a patient and steady influence. By that or any definition Richard was a superb leader. And the virtue of a life-long friend is to lend a helping hand, to always offer a sounding board of advice, or to present the world a smile and a word of kindness each day.

Richard Maullin was our life-long friend. We will miss him.

And while we mourn this loss, our hearts are with Richard’s wife Michelle, his daughters Nathalie and Celine, and their entire family.

As one of the founding partners of FM3 Research, Richard Maullin has provided opinion research and consulting services to a wide variety of national and international private sector clients, including companies involved in the fields of energy production and distribution, construction services, real estate, telecommunications, entertainment and consumer products.

Dr. Maullin has held high-level executive positions both in government and in the private sector. He is currently a member of the Board of Governors of the Independent System Operation Corporation which manages California’s electric power grid. He previously served as California Deputy Secretary of State from 1971 to 1974 and as Chairman of the California Energy Commission from 1975 to 1979. From 1980 to 1985, Dr. Maullin was President and Chief Executive Officer of MCR Geothermal Corporation. Dr. Maullin was also a member of the Social Science Research Staff at the RAND Corporation from 1965 through 1970, specializing in Latin American politics and economics. He has taught international relations at UCLA, and currently serves as Chairman of the Board of the Vilnius Yiddish Institute at Vilnius University in Lithuania.

Richard Maullin was born in Los Angeles, California and received his bachelor’s, master’s and PhD degrees in Political Science from UCLA. Dr. Maullin is bilingual in English and Spanish and has working knowledge of French and Portuguese.